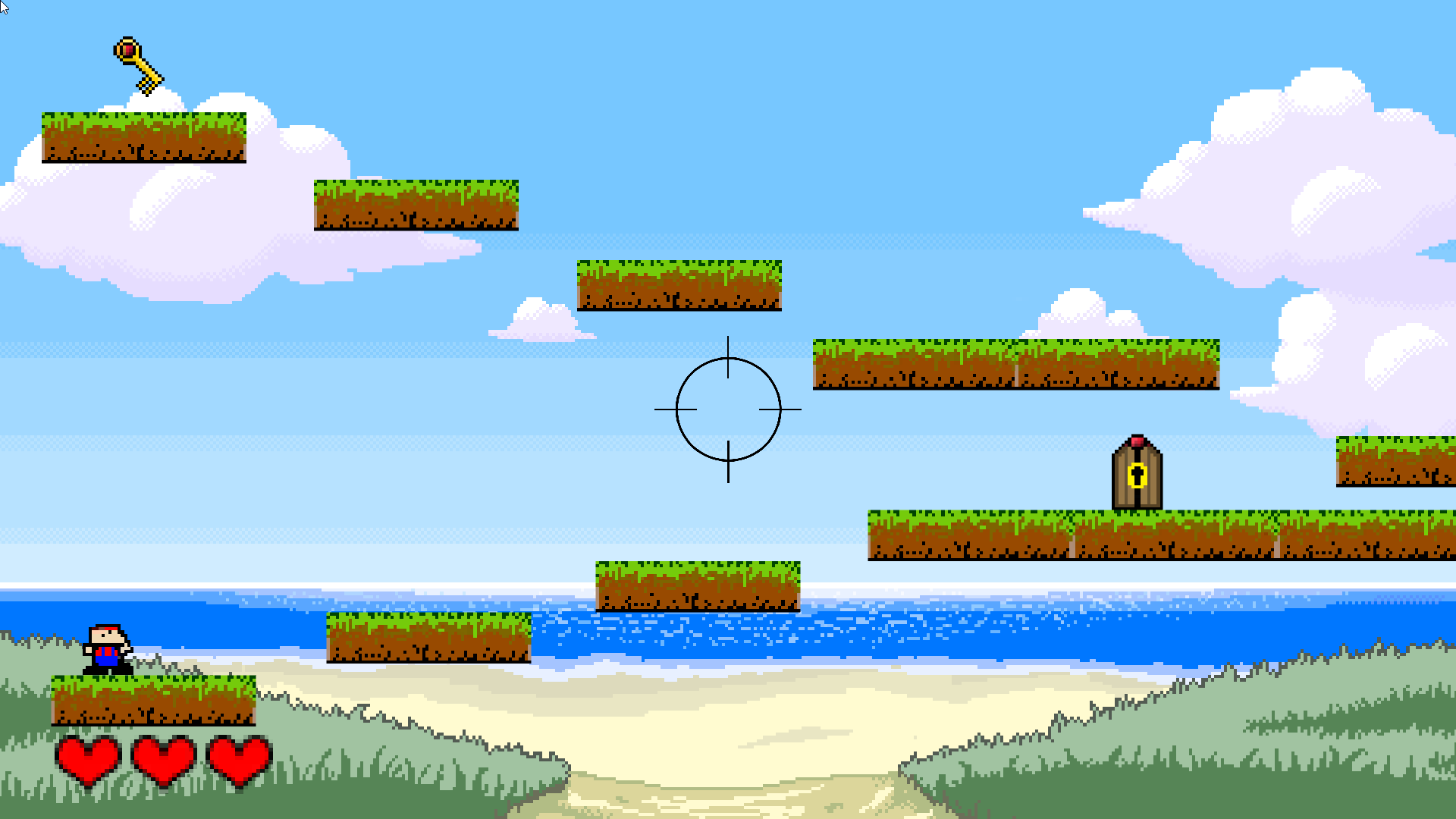 This game was made for my first year exam project on my bachelor at KADK.
The game is a parody of Super Mario and Duck Hunt.
It’s a 2-player game where one plays as “the plumber” and the other as the “hunter”. The plumber must escape by collecting keys and exiting though a door. Meanwhile, the hunter has to shoot and hit the plumber 3 times in order to win. The game was made by me and an artist.

This is a project I am quite proud of, as I did most of the work and the game turned out very successful and seemed very popular those who tried it.

The background and the other assets were made by the artist.

I designed four levels for the game. I attempted to make each one have their own feel, which is why each layout is very different. The diffuculty is also mixed, as some levels are easier for the platformer, and others for the shooter.

Stage 1
Based on observations, the first level seems to be the most balanced, as it’s very different which player wins the match.
One of my important observations is that it seems easier for the platformer, when he/she has the opportunity to progress through the level by jumping to multiple different platforms.
In the first level, the platformer can choose to jump down at the bottom lane if he/she feels pressured. However, the level is a one-way only, making it easy for the shooter to anticipate the platformer’s moves. There is a slight delay between the shooter firing, to the shot landing, which makes anticipaition an important stategy. See the level above.

Stage 2
The second level was an attempt to give the platformer more opportunities to escape, by clustering platforms closer. However, the section with the key is very narrow, and makes it easy for the shooter to land successful shots. Because of this, the shooter has a higher success rate on this level. See below.

Stage 3
This was an attempt at something very different. As I mentioned, giving the platformer more options for where he/she can to go, makes it harder for the shooter to anticipate his/hers moves. The platformer has a lot of freedom for this in this level, which is why I made it harder by adding multiple keys – The platformer has to get all of them in order to escape through the door. This makes this level fairly balanced, though still a bit easier for the platformer, as he/she can move around very freely and fast.
The marked area is where the shooter most often lands successful shots. It is slightly similar to the narrow section in stage 2.

Stage 4
Stage four is meant to be the pro-stage. It is aimed at gamers who are used to playing platformers, as it is much harder to land on the platforms. The shooter has a higher success rate in the level.
The level also includes a walljump section along with two required keys.

The music was made to also fit the paroday, and is inspired by the original Super Mario soundtrack. The instruments all resemble the 8-bit sound. The track was made both in a high-tempo gameplay version and a slower lobby version, for selecting stage and breaks in between matches.

The game can be downloaded at https://erikandersen.itch.io/plumber-hunt. The game is for two players and can be played on one keyboard or with controllers.